Greetings from UUEstrie, a liberal spiritual community that first gathered in the village of North Hatley back in 1886, as the First Universalist Church of North Hatley.

Join us Sundays at 10:30am for our weekly service.

Maybe it’s the alliteration, or maybe it’s that soup is such a comfort food worldwide, but “Soup for Syria” has become a movement across Canada. From the Salvation Army to the Soup Sisters, from Calgary to Ottawa, groups are putting on soup-a-thons for the support of Syrian refugees. Sometimes they cook up more than 5,000 servings at a time.

On a much smaller scale, in a much smaller place, UUEstrie is planning a Soup for Syria fundraiser in North Hatley. It’s on Sunday, April 24, at 12:30 p.m. Volunteers are making several different sorts of soup, along with bread and desserts. For a donation of $5, all are welcome to come and have a hearty bowl.

“All proceeds will go to help local efforts to bring refugees home to the Townships to live in safety, free from fear,” said Rev. Carole Martignacco, UUEstrie’s pastor.

She was inspired by a cookbook called Soup for Syria. “Even before we tried the recipes, our hearts were warmed by photos of refugees of all ages, accompanied by quotes by contributing chefs,” she said. “Soup is a common meal for the human family around the globe. Come share a heartwarming meal.”

UUEstrie is the Unitarian Universalist Community at 201 Main Street in North Hatley. The Soup for Syria lunch will be in the Stoddard Hall, on the lower level. It follows the Earth Day service at 10:30 a.m. All are welcome. For information, visit www.uuestrie.ca or the Facebook page UU Estrie, or call 819-842-4146.

“No man is an island, 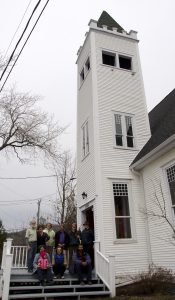 entire of itself. Every man is a piece of the continent, a part of the main….any man’s death diminishes me, because I am involved in mankind, and therefore never send to know for whom the bell tolls; it tolls for thee.”

The poet John Donne penned those famous lines in a meditation in December 1623. They speak of the interconnectedness of all beings, an idea that has more force today than ever before. As the effects of global warming slam into us, we are finally becoming aware that our “continent” earth is in danger. And so are we all.

For the first time, three years ago our earth’s atmosphere measured 400 parts per million of carbon dioxide, and it still does today, on average.

Carbon dioxide is the main pollutant that causes global warming. Before the industrial age, carbon dioxide levels averaged 275 ppm. Researchers have calculated that the safe level of carbon dioxide in the atmosphere is 350 ppm or less. They say more than that “is not compatible with life on earth.” That’s a bell tolling for all of us.

Carbon dioxide stays in the atmosphere 100 years. The solution is a slow one. It involves reducing our reliance on fossil fuels now.

To raise awareness of our collective predicament and the need for action, UUEstrie is marking Earth Day on Friday, April 22, at 11 a.m., by ringing the church bell 400 times.

Persons who would like to participate in this annual ritual are welcome to gather at UUEstrie’s bell tower on the upper level of the church, on Gagnon Street in North Hatley, just off 201 Main Street. Come a few minutes early for coffee and to get organized for the ringing.

Earth Day is also the topic for the Sunday service, April 24, at 10:30 a.m., at UUEstrie, the Unitarian Universalist Community in North Hatley. For more information, see www.uuestrie.ca, the Facebook page UU Estrie, or call 819-842-4146. 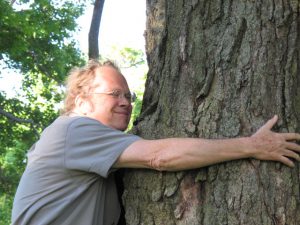 Nancy Pacaud recently passed away. She was one of the pillers of the Unitarian Universalist Church of North Hatley for many years. Her contributions were many and varied, both in time, attention and financially. In a sense, UUEstrie is a living memorial to her. We remember her with gratitude, and with sincere sympathy for her family and many friends. She is sorely missed!

Here are two photos of her at the May Pole Dance on May Day, 2009, at UUEstrie. 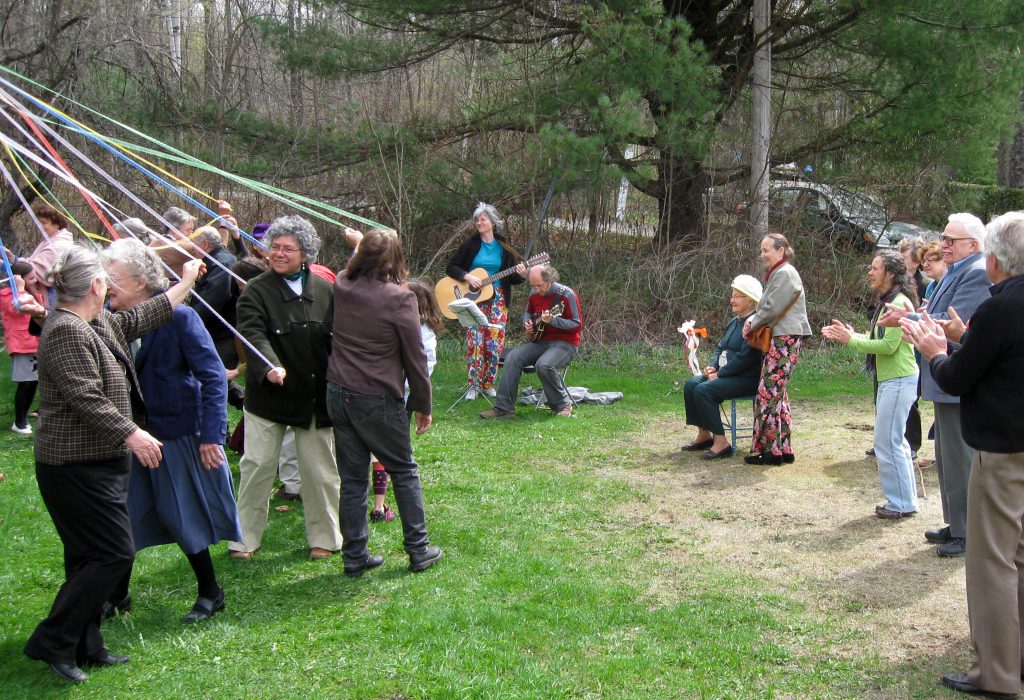 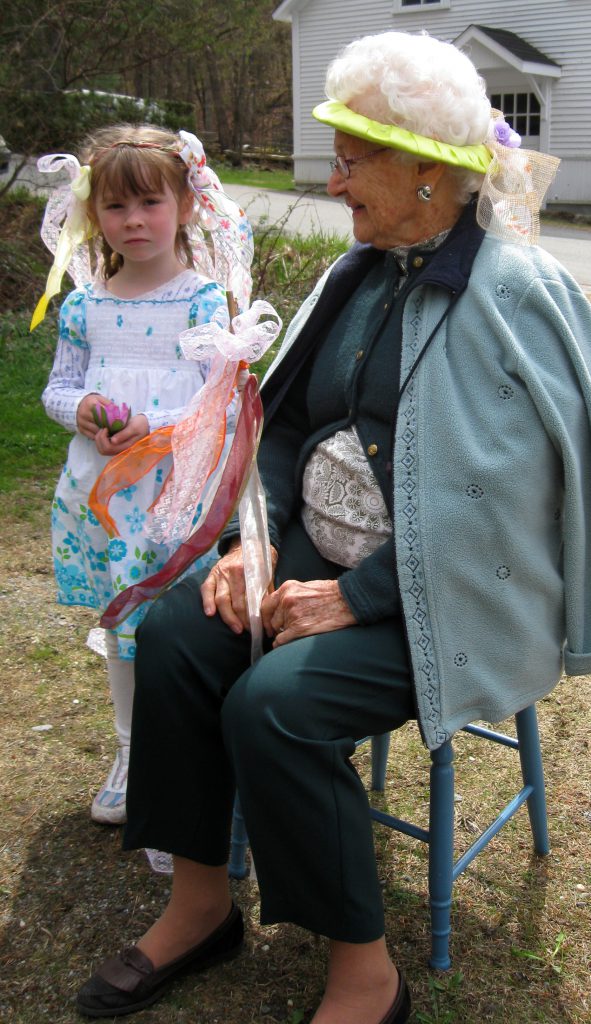 In lieu of our normal service this Sunday, we were treated to stories by the Townships Tellers as well as other local tellers. This was followed by a potluck lunch. Thank you to all who attended and shared stories and dishes.

An update from the Canadian Unitarian Council (CUC) on Rev. Fulgence. Please be sure to share the word on social media by using ‪#‎releaserevfulgence‬.

“Fulgence is meeting with his lawyers to prepare for his defence. Financial support is needed during this process; to donate directly to International Council of UUs, please click here or at the following link:https://www.paypal.com/cgi-bin/webscr…. Regrettably, Canadian tax receipts cannot be issued at this time.

ICUU is in touch with members in Burundi and providing support to Fulgence.

The Change.org petition has reached over 1,000 signatures and has been sent on to decision-makers. Please encourage more to sign on here.” 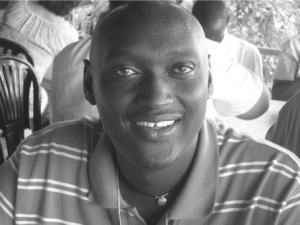 Rev. Fulgence Ndagijimana, minister of the Unitarian Church of Burundi

The Unitarian Church of Burundi has recently come under attack in the context of civil unrest within the country. The church was recently vandalized and ransacked, and members of the church have been questioned, jailed, and forced to flee for their safety. The minisiter of the church, Rev. Fulgence Ndagijimana, was arrested at gunpoint on November 16 and is currently in police custody.

Rev. Ndagijimana visited UUEstrie in 2013 as we were celebrating ten years of shared ministry. Our minister, Rev. Carole Martignacco, has been in contact with him since his visit and was “deeply moved by his peaceful spirit as he described the challenges of his ministry, struggling to serve a very poor community with limited resources”. He has spoken with her frequently about the increasing violence he faces in Burundi.

We encourage all members and friends of UUEstrie to write to Stéphane Dion (Minister of Foreign Affairs) in order to secure the immediate release of Rev. Ndagijimana.

A Facebook page has been created to keep everyone updated on the situation in Burundi. Please follow the page at https://www.facebook.com/SupportUUBurundi. The International Council of Unitarians and Universalists is currently raising funds for displaced members of the church as well as repairs and legal fees (more information can be found at https://www.facebook.com/InternationalUUs/posts/1146749508689023). You can also sign a petition demanding Rev. Ndagijimana’s humane treatment and immediate release at www.change.org.

Please help us stand in solidarity with our friends in Burundi.

In 2005, we at UUEstrie did these things and became an official welcoming congregation. We have two plaques, one in English and one in French documenting our Welcoming Congregation status.

Ten years later, we thought it was time we refresh our understanding and commitment to the inclusion of LGBTQ persons, and thought to invite once again some personal testimony from folks living in the sex and gender minorities. Hence the invitation to Lisa McDonald-Jensen and her eldest son Tadhg, to speak at the worship service on June 28 just past.

Could we have timed this service any more perfectly?

While some progress has been made since the first study four years ago spotlighting discrimination and violence against people based on their sexual orientation and gender identity, the overall picture remains one of pervasive, violent abuse, harassment and discrimination affecting lesbian, gay, bisexual, transgender and intersex (LGBT/I) persons in all regions.

“Violence motivated by homophobia and transphobia is often particularly brutal, and in some instances characterized by levels of cruelty exceeding that of other hate crimes,” according to the report by the UN Human Rights Office (OHCHR) (A/HRC/29/23) to be presented … to the UN Human Rights Council, which requested it.

Keith, with thanks to Lisa McDonald-Jensen

On Sunday, March 22, UU friend Susan Macaulay gave a presentation about the journey she’s undertaken with her mom who was originally diagnosed with Alzheimer’s disease in 2006.

Susan, who lived in Dubai for 18 years, came back to care for her Mom in her mother’s home near Georgeville  in October 2011.

Susan shared audio clips and examples of how the experience with her Mom have transformed the way she sees Alzheimer’s disease and the people who have it.

“I believe if you believe people are going to be aggressive, angry and frustrated well, sure enough that’s how they turn out to be,” Susan said. “But if you see it in a different way then you can manage the situation differently. You can change your own behavior and you can have a different impact on the person who has the disease.”

Susan said her mother, who is in the later stages of Alzheimer’s, still has many moments of clarity in which she shares her thoughts and wisdom.

Susan recently published the first in a series of ebooks about her journey with her Mom; it’s called My Alzheimer’s Story: A Daughter’s Diary and is available on Amazon here.

Our annual pageant and turkey supper was held on Sunday, 14 December 2014. This year’s original play written and directed by Kevin Jensen, takes place in medieval England. Queen Elizabeth becomes lost in the forest, and takes shelter in a peasants’ hut.
Heather Lewis took these photographs. The first four were taken during the play, she apologizes that the lighting was not very good. (Well, it was a peasant hut, after all!)

The remaining pictures of the cast were taken after the play. First up are the grandparents (Chantal and Michael), who were in a fluster over serving poached venison stew.

Joy and relief after the play. Note the incriminating antlers and deer hides on the box.

Sorry, folks, novenison stew, it was all eaten up in the play. But lots of turkey and everything else you can imagine.

Actually more desserts that you can imagine.

Thanks to all who helped , with both the play and the dinner. The kitchen was a busy place.